DK Associates, LLC Principal Daniel Edward Kenney, Esq. has a proven record of obtaining excellent results for his clients. Examples of some major case settlements include:

DK Associates, LLC Principal Daniel Edward Kenney, Esq. was lead trial counsel in a week long trial against CVS, one of the ten largest corporations in the United States. At the conclusion of the trial, the Jury returned a favorable verdict for DK Associates' Client.

DK Associates has been representing an employment law client for over six years. In 2019, an EEOC Administrative Judge issued a finding of discriminations and retaliation after a week long hearing with approximately a dozen witnesses. DK Associates is continuing to vigorously fight for the Claimant, who was denied promotions on the basis of her race (African American) and because she had complained about discrimination in the workplace.

DK Associates was co-counsel in a matter involving a multi-billion dollar financial services firm involving significant employment law allegations, including breach of contract and failure to pay incentives. The client received a significant settlement after many months of contentious litigation.

DK Associates whistleblower client receives reversal decision in Fourth Circuit Court of Appeals. The case involves a whistleblower at Morgan State University that attempted to stop political favoritism and debate rigging at the University's radio station in connection with the 2016 Baltimore Mayoral election of Catherine Pugh. 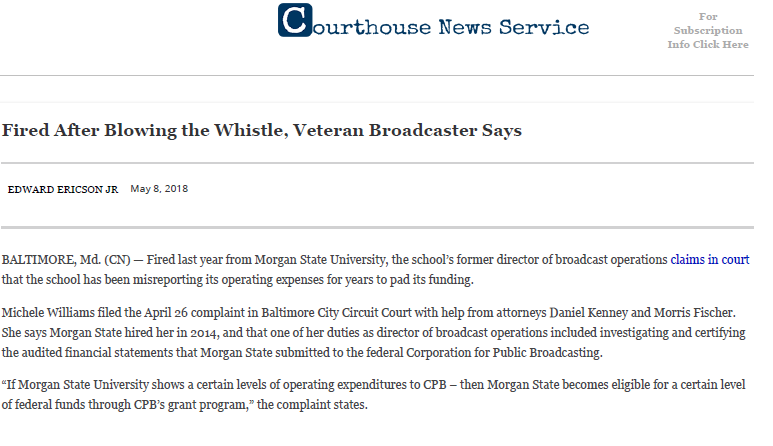 Over $2Million in Settlements Against Employers for Whistleblower, Discrimination, Breach of Contract Allegations.

*Please Note: Each case is different and that the past record of success is no assurance that the attorney will be successful in reaching a favorable result in any future case. The success of any future case depends upon a number of factors.